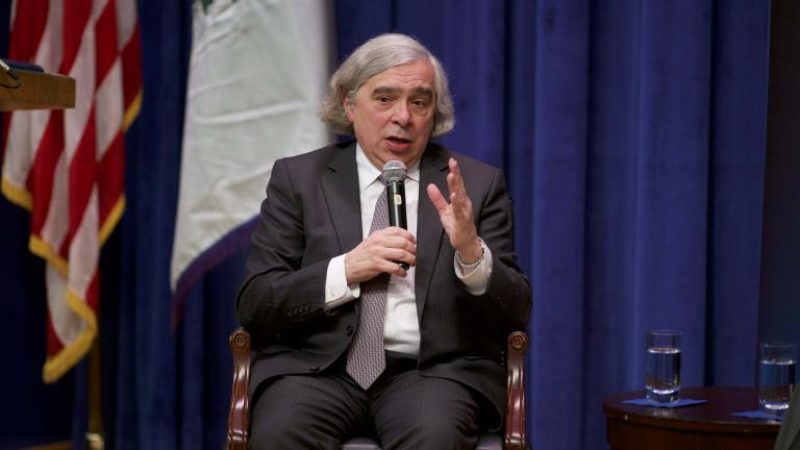 The Institute for the Study of Diplomacy awarded U.S. Secretary Ernest Moniz with the 32nd annual Jit Trainor Award for Distinction in the Conduct of Diplomacy on April 11, 2016. Dr. Moniz spoke to a packed audience in Georgetown’s School of Foreign Service, sharing fascinating details of his team’s role in the Iran nuclear deal negotiations, as well as broader reflections on the role of the U.S. Department of Energy in supporting science and diplomacy.

After a warm welcome from Ambassador Barbara K. Bodine, ISD director; Dean Joel Hellman of the Edmund A. Walsh School of Foreign Service; Frank J. Hogan, chairman of the Trainor Lecture Fund Endowment; and Ambassador Thomas R. Pickering, chairman of the ISD Board of Advisers, Moniz opened his remarks with an introduction on the application of science and technology to achieve diplomatic outcomes on complex global issues like climate change and nuclear security.

He recalled the sudden global security dilemma in 1992, when the break-up of the Soviet Union left an enormous array of nuclear weapons without a defined nuclear security paradigm. Moniz heralded the successful arrangement for the purchase of Soviet weapons-grade highly enriched uranium (HEU), which was downblended to serve as fuel in U.S. nuclear facilities and provided 10 percent of U.S. electricity needs over the next 20 years. This was a technically complex deal to broker, but a vital step in the Soviet disarmament process at the conclusion of the Cold War.

Some of the technology used to verify that Russia was no longer using HEU for weapons purposes also came into play as critical verification technology for the 2015 Joint Comprehensive Plan of Action, better known as the P5+1 nuclear deal with Iran. “Early in 2015,” he recalled, “the U.S. and Iran could not break the impasse without integrating science and technology.”

Moniz participated in the negotiations to focus on the technical aspects of the deal. One of his Iranian counterparts, Ali Akbar Salehi, had been a student at MIT during while Moniz was in the MIT physics department. Although the two had not known each other, Moniz commented that their common training helped augment the trust, on a scientist-to-scientist level, to keep the negotiations moving forward.

Moniz highlighted some of the real breakthroughs of the P5+1 negotiations last year. For the next 15 years, he noted, there will be a substantial rollback of the Iranian nuclear program, along with a stepped-up verification regime. Iran once had a heavy-water plant capable of producing more plutonium in a year than needed for one bomb; today that reactor’s core has been filled with cement. The verification technologies in place also would signal any attempts by Iran to start producing nuclear weapons. These developments give the world the security of a one-year breakout timeframe, meaning Iran would not be able to produce a nuclear weapon within that time.

Criticism of the Iran deal, he countered, focus on what the deal did not do, rather than its accomplishments. “It did not stop arms transfers to Hezbollah. It did not stop the Houthi problem. It did not solve the missile problem,” he noted. But to simply walk away from the P5+1 breakthroughs, is “not a credible idea,” he insisted. Instead, the challenge now is the need to focus on sustaining the verification regime over many decades.

These same principles of science, technology, and innovation also converge to solve the world’s greatest challenge: climate change. Moniz praised the December 2015 COP 21 climate change agreement as an extraordinary success, but argued that science needs to push these agreements along. If we can get environmental technology costs down significantly, he argued, there would be a more ambitious effort around the world to protect the environment, and a commensurate global benefit down the road. “We’re still looking at vehicle efficiency, electric cars, and next-generation biofuels – these are still too expensive,” he noted. For the one billion people living without electricity, he mentioned the great advances in solar/battery/LED systems, which are having a huge impact in people’s lives.

Moniz referred to the U.S. Department of Energy as the “department of weapons, windmills, quarks and quagmires,” reflecting the broad range of DOE programs and activities. He reminded the audience that DOE has long played a key role in primary energy research, supporting the work of over 30,000 scientists in the United States. DOE also has unparalleled data processing capabilities, and in fact initiated the Human Genome Project in the 1980s. At its core, Moniz remarked, DOE continues to contribute to peace and security in the world, a role that goes back to years of quiet diplomacy between DOE scientists and their Soviet counterparts, even at the height of the Cold War.