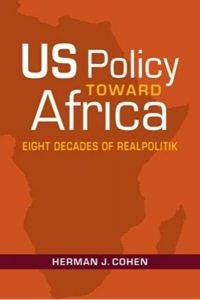 November 11th, former Assistant Secretary of State for African Affairs, Ambassador Herman Cohen, spoke at an ISD virtual event about his book, US Policy Toward Africa: Eight Decades of Realpolitik.

In a conversation with the Director of Georgetown’s African Studies Program, Professor Lahra Smith, Ambassador Cohen talked about the United States’ role in Africa and his experience working to implement policies to help African countries.

Notably, Ambassador Cohen talked about his role in negotiating with the South Africans to transition Namibia into independence, and to end apartheid. He also gave policy recommendations for fostering the development in African countries. According to Ambassador Cohen, there needs to be more investment in the private sector, and in order to do that, African people and organizations themselves need to be encouraged to invest.

He concluded with an examination of what Joe Biden can do to foster African development, and acknowledged that both President Obama and Vice President Biden were committed to fighting against corruption and for human rights, while also encouraging investment.