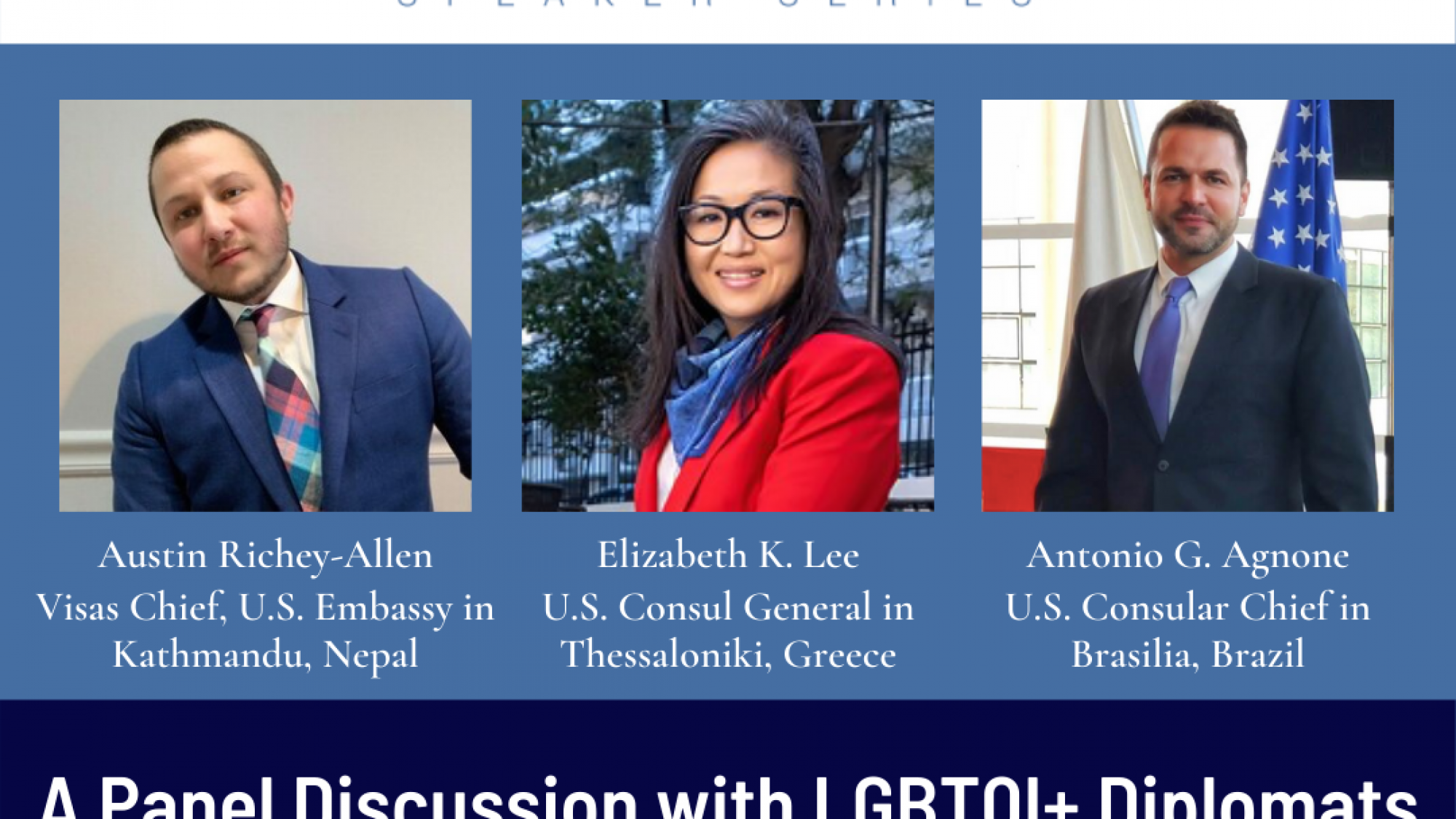 Join us for a conversation with Foreign Service Officers Austin Richey-Allen, Antonio G. Agnone, and Elizabeth K. Lee. They will share insights from their Foreign Service careers, and provide thoughts on diversity and inclusion, including perspectives on serving as openly LGBTQI+ diplomats. They will offer their advice for emerging and aspiring foreign policy leaders.

The Diverse Diplomacy Leaders Speaker Series connects current and former career Civil and Foreign Service Officers with those considering or entering careers in foreign policy. This event is brought to you as part of an Una Chapman Cox Foundation project on American Diplomacy and the Foreign Service.

This event will have live closed captioning.

Austin Richey-Allen joined the U.S. Department of State as a consular-coned Foreign Service Officer in 2011. He is currently the Visas Chief at the U.S. Embassy in Kathmandu, Nepal. Austin’s previous assignments include the U.S. Embassy in Manila, the U.S. Consulate in Ciudad Juarez, and domestic positions in the Bureau of Consular Affairs in the offices of Fraud Prevention Programs and American Citizen Services.

Austin received his Juris Doctorate from the University of Minnesota Law School and his Bachelor of Arts from Sarah Lawrence College. Prior to joining the Foreign Service, he worked as an attorney in Minneapolis. He grew up in Massachusetts and is accompanied by his wife Anna (also a Foreign Service Officer) and his daughter Tabitha. Austin is a proud representative and advocate for transgender employees and family members in the State Department, and was the Policy Director for glifaa (LGBT+ Pride in Foreign Affairs Agencies) from 2019-2020.

Antonio G. Agnone is a career diplomat serving a one-year assignment in Islamabad, Pakistan before he returns to Brasilia, Brazil as the Consular Chief. He specializes in Southeast Asian and Western Hemisphere affairs including issues of bilateral extradition, international parental child abduction, protection of U.S. citizens abroad, and disaster recovery. In addition to Brasilia and Islamabad, he served at the U.S. Embassy in Haiti, the U.S. Embassy in Algeria, the U.S. Embassy in Pakistan, and the U.S. Embassy to the Holy See.  Mr. Agnone speaks fluent Italian and Portuguese and has qualified in Urdu and French.

Prior to joining the Foreign Service, Mr. Agnone served in the United States Marine Corps as a Combat Engineer. He served two tours of duty in Iraq’s Al-Anbar province focusing on improvised explosive devices. His experience in the military led him to LGBT advocacy where he served as a fellow for the Human Rights Campaign spearheading the initiative to repeal “Don’t Ask, Don’t Tell.”

Mr. Agnone graduated from Ohio State University and earned a master’s degree while active duty in the Marine Corps from Webster University. Originally from Ohio, he now lives in Brasilia with his spouse.

Elizabeth K. Lee serves as the U.S. Consul General in Thessaloniki, Greece. Ms. Lee is a career member of the Foreign Service with over thirteen years’ experience as a foreign policy leader, manager, and negotiator on a diverse range of regions and issues, including the Middle East, East Asia, and the United Nations Security Council. Previous assignments include the U.S. Embassies in Seoul and Baghdad, the former U.S. Consulate General in Jerusalem, the U.S. Mission to the United Nations in New York City, and the Israel and Palestinian Affairs Desk at the State Department in Washington D.C.

Ms. Lee holds an M.A. degree in Public Policy and International Affairs from Princeton University, a law degree (J.D.) from the University of Minnesota, and a bachelor’s degree in English Literature from Grinnell College. She is proficient in Greek, Korean, and Hebrew, and has studied Arabic and Spanish.  She is a native of California and is accompanied by her Golden Retriever, Pumpkin, aka Kolokithoula. She was the President of glifaa (LGBT+ Pride in Foreign Affairs Agencies) from 2018-2019.