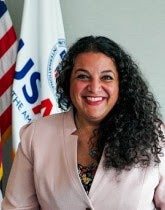 Ms. Salahi joined USAID in March 2009 as a Foreign Service Attorney, beginning her USAID tenure in the General Counsel’s Office in Washington, covering the Africa Bureau. She then served in Egypt during the Arab Spring, in South Sudan shortly after the country’s independence, and again in Egypt for a second tour as the senior Resident Legal Officer from April 2014 until June 2017.

Before joining USAID, Ms. Salahi worked for several years as a corporate associate in New York with the law firm of Simpson Thacher & Bartlett LLP (2001-2004), and as a negotiations advisor for the Middle East peace process with Adam Smith International (2004-2009).

Ms. Salahi received her Bachelor’s degree in international relations from Boston University and a Master’s in Law from Harvard Law School.