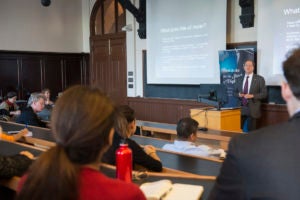 Mr. Brzezinski has had a distinguished career in both public service and the private sector. Most recently, he has been a partner in the Washington, D.C. office of McGuireWoods law firm, specializing in anti-corruption law. In this capacity, Mr. Brzezinski has helped U.S. companies comply with laws regulation the way business is conducted overseas. At the same time, he has been very active in promoting broader public knowledge about the challenges of overseas corruption and ways law can be used to address it.

Mr. Brzezinski served as a Director on the National Security Council in the White House from 1999 to 2001. During this time he coordinated interagency policy formulation and advised the President and the National Security Advisor on issues relating to Russia, Eurasia and the Balkans, including regional democracy promotion, international law, war crimes accountability, and was responsible for public diplomacy relating to the regioun. He helped lead U.S. policy implementation in relation to NATO enlargement and in response to the Kosovo conflict. He also coordinated presidential summits in Russia and Ukraine.

From 1996 to 1999, he was an attorney at Hogan & Hartson law firm, where he assisted U.S. companies to expand their businesses around the world and to create economic opportunities in developing countries. From 1991 to 1993, he worked in Poland as a Fulbright Scholar, where he researched and wrote about the country’s constitutional transition.

Mr. Brzezinski is a member of the J. William Fulbright Foreign Scholarship Board and the Council on Foreign Relations. He is the author of The Struggle for Constitutionalism in Poland and of numerous articles on foreign policy and law. He holds a B.A. from Dartmouth College, a J.D. from the University of Virginia School of Law and a Doctorate from Oxford University. He is married to Natalia Brzezinski, a Huffington Post blogger and freelance writer, and they have one daughter named Aurora Emilie.