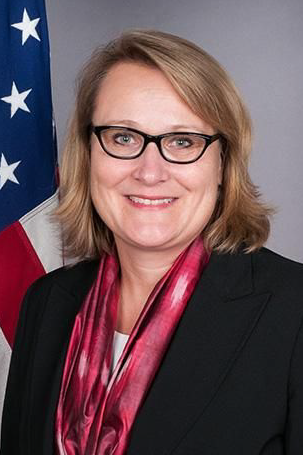 A 25-year veteran of the Foreign Service, Ambassador Joan Polaschik served most recently as the Acting Principal Deputy Assistant Secretary of State for Near Eastern Affairs, from 2017 until 2019. Prior to that, she served as the U.S. Ambassador to the People’s Democratic Republic of Algeria, 2014-2017. Her career has focused on the Middle East and North Africa, with assignments as Director of the State Department’s Office of Egypt and Levant Affairs and Director of the Office of Israel and Palestinian Affairs; Deputy Chief of Mission at the U.S. Embassy in Tripoli, Libya; Regional Refugee Coordinator based at the U.S. Embassy in Amman, Jordan; Political Officer in Tunisia; and other staff-level assignments in the Bureau of Near Eastern Affairs. She also has served in Azerbaijan and Uzbekistan.

Ambassador Polaschik received a B.A. from the University of Virginia and an MSFS from Georgetown University. She speaks Arabic and French, and some Azerbaijani and Russian.