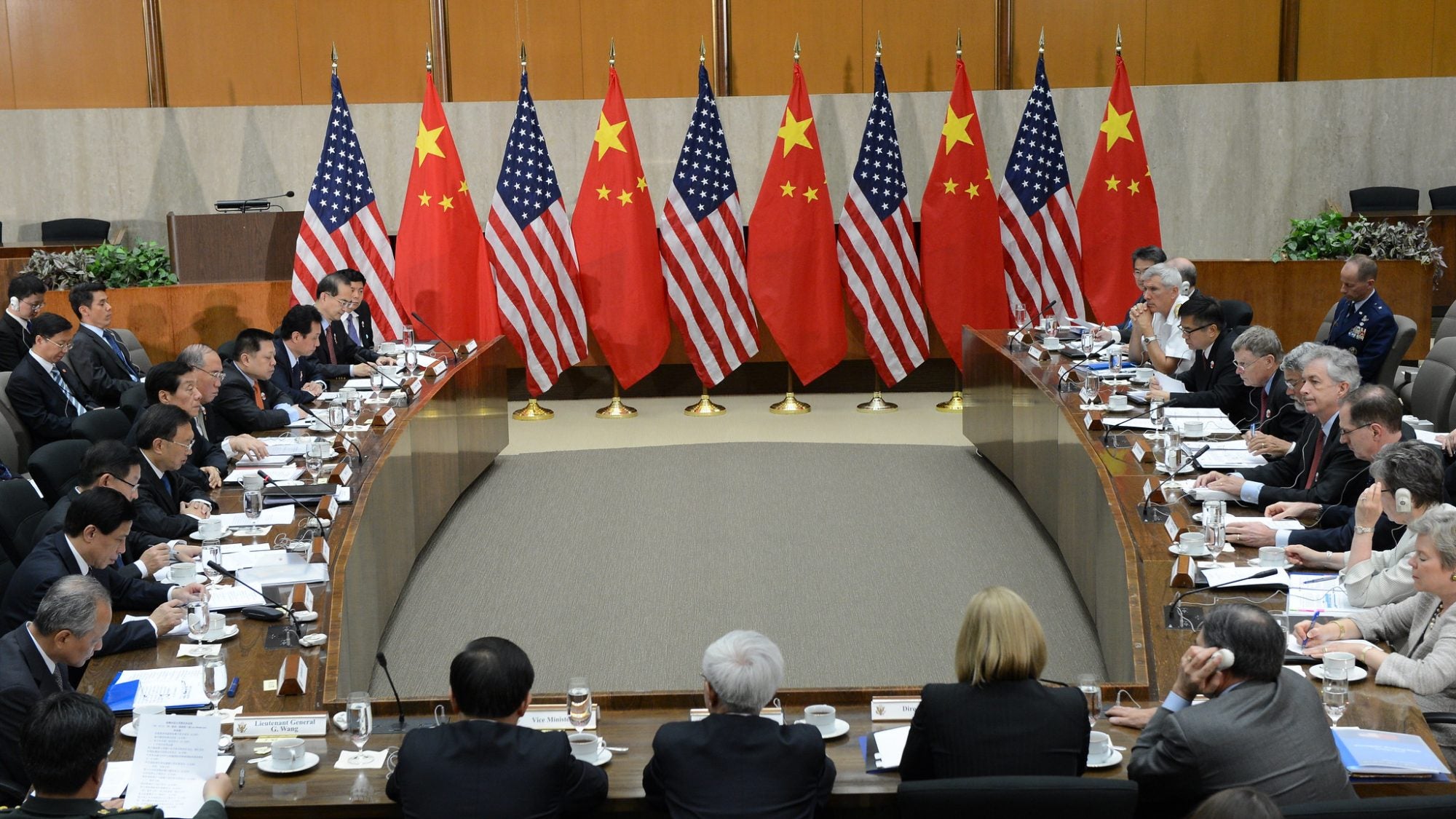 This article is part of a series of posts by ISD staff and fellows — Transition Notes — which provide insights and recommendations on key foreign policy issues as the federal government transitions to a new administration under President-elect Biden.

Want to stay up-to-date with the latest from The Diplomatic Pouch? Sign up for our newsletter, This month in diplomacy.

There is broad agreement that relations between the People’s Republic of China and United States are in free fall — victim of Xi Jinping’s ambitions, the growth of Chinese military and economic power, the Trump administration’s disjointed policy flailing (including in the trade arena), and domestic pressures in both countries to act tough.

Superficially, China appears to be a classic rising power and America’s best days appear behind it. The power equation is more complicated than this observation suggests, but it is fair to say that the Biden administration must deal simultaneously with serious domestic failures and the multidimensional challenges presented by its most significant global competitor.

The Biden administration must address five critical dimensions of Sino-U.S. relations: 1) safeguarding U.S. security; 2) avoiding a dangerous escalation to catastrophic conflict; 3) limiting the risks of mutual misperceptions; 4) neglecting opportunities for collaboration; and 5) avoiding fissures with allies and friends over China.

Sino-U.S. relations are the most consequential and complex the Biden Administration will face with any other state. It will be essential for the Biden team to address three questions:

Hawks in both countries will reject cooperation while minimizing the risks of uncontrolled competition. Strategists in Beijing and Washington must not assume that the bilateral relationship can only be pursued on one of the five dimensions of interaction.

The fundamental security dilemma the United States faces is as a global power with global security responsibilities. Meanwhile, in the security realm, China remains focused on projecting power in the Asia Pacific region. Chinese military power is growing, placing at increasing risk U.S. military assets and relationships in the region.

China is shifting the balance of power on its periphery to America’s detriment. Chinese anti-access/area denial capabilities, including the ability to threaten U.S. carrier battle groups and base facilities with intermediate-range ballistic missiles, reduce the credibility of the U.S. security umbrella over its Asian allies and raise the danger that any conflict will escalate rapidly. Chinese cyber intrusions in the United States suggest that China has a range of tools to utilize in such a conflict, as do we. Chinese theft of U.S. intellectual property and government subsidized state-owned industries harm U.S. competitiveness. Millions of American workers have seen their jobs disappear thanks to Chinese competition.

That said, China has vulnerabilities — an aging population, declining annual GDP growth, growing domestic debt, inefficient state-owned industries, and a deeply authoritarian political system that stifles innovative thinking. Xi has made many domestic enemies in his rise to power since 2013. China’s future is not assured. A leadership that electronically monitors its citizens, imprisons in excess of a million of its minority Muslim Uighur citizens, and tramples on Hong Kongers’ rights cannot feel entirely secure.

Thucydides, the chronicler of the Peloponnesian War between a rising Athens and an established Sparta, argued that human conflict results from the interplay of “fear, honor, and interest.” All three factors are evident in contemporary Sino-U.S. relations. The risks of conflict are high as U.S. and Chinese militaries test each other on the high seas and in the air. The former exercises its freedom of navigation rights and the latter appears determined to create new facts in the Himalayas, the South China Sea, and East China Sea. Taiwan looms larger in the security calculations of both the Chinese and United States as strategic ambiguity is cast aside. It appears increasingly difficult for either Beijing or Washington to back off from confrontation.

In 2019, over 360,000 Chinese students studied in the United States and thousands of American young people traveled to China. During the Obama administration, government-to-government dialogues between Beijing and Washington were the norm. Academic exchanges were robust.

Now a combination of Covid travel restrictions, Xi’s crackdown on unregulated expression in China, and the Trump administration’s determination to proclaim a new Cold War has insured Chinese and Americans know less and less about what motivates each other. On both sides, foreign press visas have been cancelled and consulates closed. Meanwhile on the diplomatic front, according to William Burns and Linda Thomas-Greenfield, “The State Department trains nearly twice as many Portuguese speakers as it does Arabic or Chinese speakers.” Good news for Brazil and Portugal. but not for understanding Beijing or Cairo.

According to polling by the Pew Research Center, neither Xi’s China nor Trump’s United States is popular among many European and Asian publics. The incoming Biden administration is determined to reverse the precipitous decline in U.S. ties with its allies.

Three countries are the biggest CO2 emitters — China, the United States and India. Without cooperation from all three, global climate change will worsen. There are other areas where U.S. and Chinese interests intersect — nuclear non-proliferation, global health, and, of course, economics and trade. Two-way trade between China and the United States totaled in excess of $600 billion in 2019. After Mexico and Canada, China was the 3rd largest goods export market for the United States in 2019.

However, both China and the United States may be becoming more inward-looking with Biden proclaiming a “foreign policy for the middle class” and Xi announcing “Made in China 2025” — both intended to bolster domestic economic self-sufficiency in their respective countries. The difference is that China is also concluding trade agreements with Asian and European partners, while the incoming Biden administration’s trade agenda is largely undefined.

Neither our Asian nor European allies wish to have to choose between Beijing and Washington. There is broad appreciation of U.S. security commitments and Chinese economic ties, while apprehension that the former are eroding and the latter may be used as a cudgel in support of Beijing’s political goals. America’s friends are eager to see a return to climate change activism, global health cooperation, robust non-proliferation efforts and rejuvenation of alliance ties.

This said, differences will continue in the trade arena with some in and around the Biden administration likely to be skeptical of the benefits of globalization and the trade agreements that undergird the liberal order, as well as of the strategic linkages that these agreements foster. Asian nations trade more with themselves, including China, than with the United States. If we cannot craft a trade agenda relevant to the needs of our Asian partners, only China will gain.

Both Xi and Biden face serious challenges at home, albeit very different ones. China suffers from an excess of authoritarian control, while the fractured, individual, state-driven responses to the Covid pandemic in the United States have demonstrated the limitations of the American model. Both countries are experiencing governance deficits. The insurrection at the U.S. Capitol on January 6 was emblematic of the domestic issues facing the United States. The worst choice for either Xi or Biden would be to blame the other for his domestic woes. However, this has been the default position of both Americans and Chinese in recent years.

Uncontested American hegemony in China’s neighborhood is unsustainable. A U.S.-organized Asian coalition against China is unlikely, absent a precipitating attack on a neighbor by Beijing. This argues for a balanced approach to China and the region, sensitive to all of the dimensions of this complex and important relationship.

Casimir Yost is a Senior Fellow in the Institute for the Study of Diplomacy and Director Emeritus of the Institute. He teaches a graduate seminar in the School of Foreign Service, entitled “U.S. and China: Decisions on War and Peace” and an undergraduate seminar, “War and Presidential Decision Making.” From 2009 to 2013, Mr. Yost served on the National Intelligence Council, where he directed the Strategic Futures Group and its predecessor, the Long Range Analysis Unit.