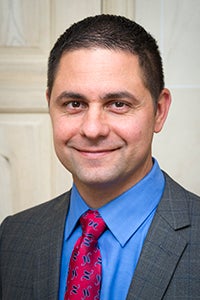 Lieutenant Colonel Jay Sabia commanded the 4th Fighter Squadron where he led 40 Airmen in one of the U.S. Air Force’s premier F-16 squadrons.

Over the past eighteen years, Lieutenant Colonel Sabia held numerous tactical and operational level positions throughout the United States Air Force. As a core F-16 pilot, he participated in multiple bilateral, coalition, joint and NATO training exercises throughout Europe, northern Africa, the Middle East, and Pacific. He flew combat missions in both Operations Allied Force over Serbia and Southern Watch over Iraq.

Lieutenant Colonel Sabia graduated from the US Air Force Academy in 1995 and earned a graduate degree from George Washington University in 2003. He is married with two sons.

He is currently the Special Assistant to the Special Envoy for Buantanamo Detention Closure at the U.S. Department of Defense.