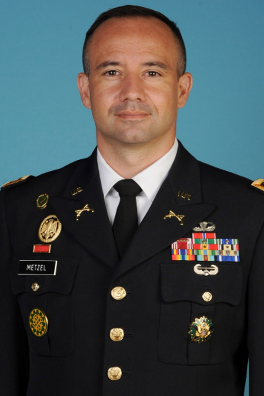 Lt. Colonel Matthew Metzel currently serves as a Senior Strategic Planner in the Strategy Integration Directorate, Office of the Chief, Army Reserve. Matt enlisted in the US Army in 1993, was selected as an Officer Candidate, and then deployed his platoon to Bosnia in 1996 in support of Operation Joint Endeavor. He left the military in 1997 to work as a probation officer. In 2001, he was mobilized to support Operation Noble Eagle, then joined the Active Guard and Reserve program in 2002. In 2007 he deployed to Iraq with the 535th Military Police Battalion.