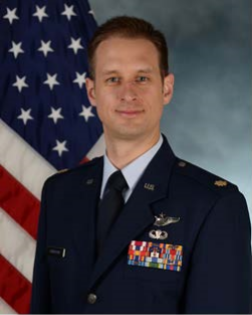 Maj Adam G. Chitwood was the weapons officer for the 28th Bomb Wing, where he vectored tactical training for two operational B-1 squadrons, prepared the B-1 for its first Pacific deployment in a decade, and directed large force exercise development for the largest training airspace in the continental United States. He has deployed to the Middle East multiple times, most recently leading the 37th Bomb Squadron in dropping over 5,000 Joint Direct Attack Munitions across Syria, Iraq, and Afghanistan, earning the Air Force Association’s Lemay Award for Best Bomber Crew in the Air Force. Prior to his weapons officer tour, Adam developed hot pit refueling procedures for the B-1, revolutionizing the way B-1 training sorties are generated while saving millions of dollars annually in fuel costs.