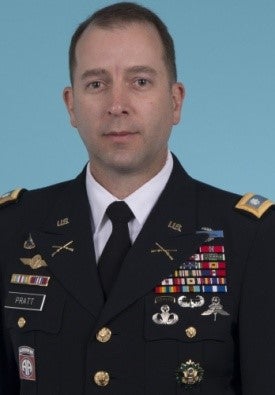 Colonel Michael Pratt comes to ISD from Headquarters, Department of the Army, where he served as the Executive Officer to the Secretary of the Army.

Colonel Pratt has led infantry units from the platoon to the battalion level and has operational deployments to Kuwait and Kosovo in addition to combat deployments to Afghanistan and Iraq. His most recent tour was in eastern Baghdad where he was a battalion operations officer during the height of sectarian violence during the war.

Colonel Pratt’s other assignments include serving as an assignment officer at the U.S. Army Human Resources Command, and as a Department of Defense Fellow in the Bureau of International Narcotics and Law Enforcement Affairs at the U.S. Department of State in Washington, DC. His battalion command was in Vilseck, Germany.

Colonel Pratt earned a Bachelor of Science in Systems Engineering from the U.S. Military Academy at West Point, and a Master of Arts in Management from Webster University. He resides in Northern Virginia with his wife and their two sons.